Undoubtedly, the season of joy and exuberant moments to rejoice. Monsoon season brings solace to all after the long and scorching summer season.  But the arrival of monsoon is not all good news as it is the bearer of a number of infections and diseases.

If you take a look at the statistics of the last few years of the most common water and mosquito borne disease you will be shocked to know that: 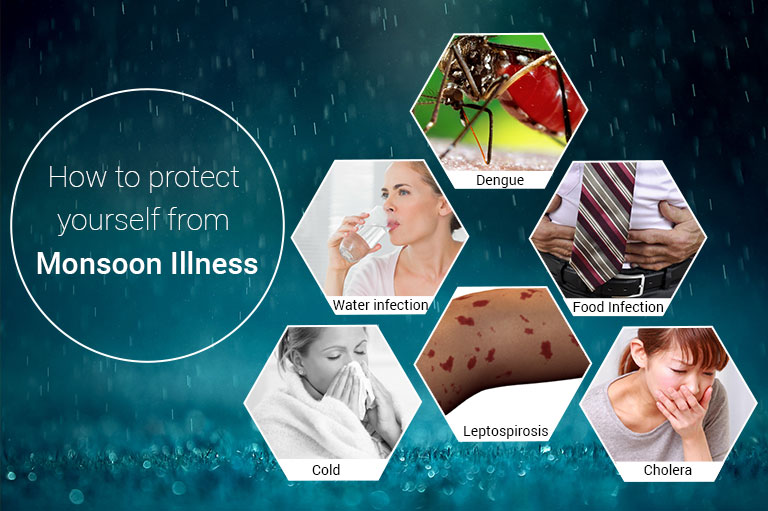 It is imperative to know the symptoms of the diseases transmitted by mosquitoes in monsoon to take precautionary actions. The mosquito borne diseases are listed below:

In more severe cases, the symptoms can cause bleeding from the mouth and nose, severe abdominal pain, huge fall in blood pressure, deterioration in pulse rate, blood in the excretion, difficulty in breathing. It can also lead to multiple organ failure.

The symptoms are as follows:

The above mentioned mosquito diseases are quite prevalent and common but there are many other diseases which are also caused by mosquito bite such as Zika virus or Zika fever, west Nile virus, yellow fever, Encephalitis. Therefore, one should not only be careful during monsoon season but also should be cautious during other season as well to avoid mosquito diseases or mosquito bite.

Precautions you need to take to avoid diseases transmitted by mosquitoes are as follows:

Apart from all the above mentioned precautions, another vital precaution one should take to avoid diseases caused by mosquito is to keep a check on the stagnant water at your home. Stagnant water of ponds and lakes also entices mosquitoes, therefore staying away from such areas is advisable.

Stagnant Water: During monsoon stagnant water becomes a strong breeding ground for the mosquitoes. In this season, rain water is filled and swamped everywhere such as ponds, drains, plant tub, buckets, water coolers, damaged vessels are flooded with water. Therefore, it is important that one should try to clean all the possible areas. The risk of mosquitoes breeding in these places can be reduced by:

We all love this season, and it will always bring joyful moments for us. Don’t stop celebrating this season, just take little steps of precaution and stay safe this monsoon season.

One thought on “How to Save Yourself From Mosquito Borne Disease During Monsoon?”