Swine Flu disease originated in pigs which also known as influenza in pigs. Initially the swine-flu disease virus transmitted to the people directly in contact with the pigs. The infection is air-borne and was easily transmitted through humans throughout the world. Each year marks new cases of swine flu globally. Also, known as H1N1 flu infection, swine flu disease is a subtype of influenza.

Swine flu is caused by the influenza virus that results in respiratory disease in pigs. It is characterized by barking cough, nasal secretions and listless behaviour in pigs. The virus can spread to humans and with time, the virus mutates which means that changes in its structure occurrence and its capability to infect increases and is also easily transmissible among humans.

The swine flu virus is transmitted from person to person through aerosol infection or droplet infection which occurs by the inhalation or ingestion of droplets which are released into the air by infected people through coughing, sneezing. It also spreads by skin to skin contact, by saliva and touching of contaminated objects or surfaces. The incubation period for the disease is from one to four days. 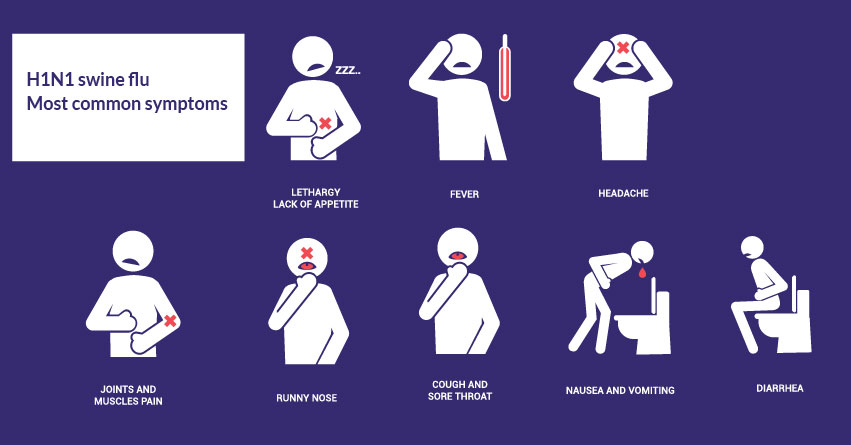 Although the infection is usually mild, it can cause serious respiratory problems such as pneumonia. Pregnant women, people with systemic diseases or weak immune system are more susceptible to swine flu. People with asthma, heart diseases, and diabetes are also at high risk. Children under five years and people over sixty-five years are more susceptible to the virus. People travelling to areas affected by swine flu, pig farmers and veterinarians are also at risk.

The flu-like symptoms attached to swine flu makes it harder to identify. Thus, it is important to pay attention to all the symptoms and seek proper medical assistance immediately. The symptoms of swine flu include:

The disease usually lasts from 3 to 7 days and the symptoms are usually mild. Swine is highly contagious about 5 to 7 days after the symptoms develop. In uncomplicated cases, the symptoms start to resolve after about 7 days but may persist for a longer time in some cases. Most of the people having swine flu recover completely and have a normal life expectancy although in some cases swine flu can cause various complications such as:

Severe cases of swine flu can be fatal.  It can cause various complications especially in people with an underlying medical condition or compromised immune system. The most common cause of death due to swine flu is respiratory failure. Pneumonia which leads to sepsis and high fever causing neurological problems are other causes of death. Excessive vomiting and diarrhoea can also lead to dehydration and electrolyte imbalance which causes kidney failure. Young children and elderly people are more susceptible to fatalities.

One thought on “Swine Flu Disease: Causes and Symptoms”